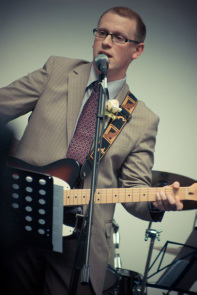 Michael has a wealth of experience in performing and recording on a variety of instruments and has played in numerous bands over 20 years. He can create backing tracks, add parts to your existing songs and is also available for live work. He is an experienced "dep", particularly on drum kit and as a vocalist and has played with a number of Reading's well known function/cover bands as well as frequently playing live with his own bands at a variety of events and UK/European festivals.

Currently Michael is working on two major projects. He is the main songwriter and also singer/bass player in progressive rock band I Am The Manic Whale and has released two albums with them.
http://iamthemanicwhale.bandcamp.com
He is also playing keyboards for a busy professional function band, The Kicktones, bringing the sweet good-time party vibes to your event.
http://www.thekicktones.co.uk/

Listen to other examples of Michael's performances on the portfolio page.